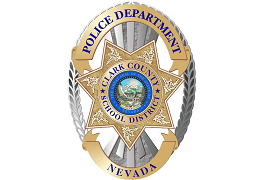 Neighboring businesses and property owners experiencing incidents involving juveniles or students should notify their local police agency along with School Police Dispatch. In a joint effort with local police agencies we can better serve our community and help alleviate problems within the community.

Do not hesitate to contact School Police or the on-site school administrator regarding incidents involving students. Information sharing is vital to a long-lasting community partnership.

The Injured Police Officers Fund (IPOF) was formed in October of 1982 when LVMPD motor officer James MacLaren was shot in the head during a traffic stop. Fortunately, Officer MacLaren survived his injuries; however, he was forced into medical retirement. The IPOF held its first fundraiser when Sheriff John Moran and his wife Goldie Moran hosted "A Night Out with the Stars." All of the funds raised from this event were donated to the MacLaren family, and the IPOF was born.

In 1982, the IPOF represented the officers of LVMPD, Henderson P.D., North Las Vegas P.D., Boulder City P.D. and the Southern Region of Nevada Highway Patrol. In 1992 the IPOF added the Mesquite Police Department to the organization. In 1995, under the leadership of Sheriff Jerry Keller, the IPOF added the officers of the City of Las Vegas Detention and Enforcement, University of Nevada Las Vegas Police, Clark County Park Police and the Clark County School District Police.

The IPOF is comprised of sworn law enforcement officers from each of the member agencies. Each agency has one primary and one alternate representative. These officers volunteer their time and are appointed by the Chief of Police of their agency, or in the case of LVMPD officers, the Sheriff of Clark County.

The IPOF typically holds at least two major fundraisers each year -- the annual IPOF Golf Tournament and the annual IPOF Classic Car Show. The IPOF also works with various community non-profit organizations within the Las Vegas area throughout the year, including Friends of Metro K9.

The IPOF will assist with expenses not covered by industrial insurance for serious line of duty injuries or a line of duty death. These expenses may include, but are not limited to, reimbursement for equipment damaged, childcare expenses not normally incurred, and other expenses on a case-by-case basis.