Meeting Schedule
None At This Time 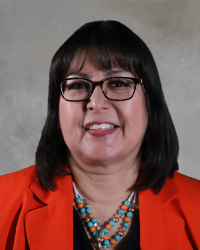 Irene Bustamante Adams was elected to the CCSD Board of Trustees on November 8, 2022. She represents District F, which includes Spring Valley, Mountains Edge, Southern Highlands, and Sandy Valley. She was raised in the farming community of Kerman, California and woke before dawn to work the agricultural fields alongside her siblings. She was the first in her family to attend and graduate college, earning a Bachelor of Science degree in business management from California State University, Fresno. In 2007, Bustamante Adams became the first Latina in Nevada history to earn an Executive Master of Business Administration (EMBA) degree from University of Nevada, Las Vegas. She holds certificates from Harvard Kennedy School of Government and from the Kettering Foundation.

Irene serves as the Deputy Director & Chief Strategy Officer for Workforce Connections, Southern Nevadas Local Workforce Development Board. She is a dynamic and transformational leader christened with many recognitions like the National Trailblazer by Emerge America and Women Inspiring Nevada by Vegas Inc.

Prior to joining Workforce Connections in 2017, Bustamante Adams spent 18 years at MGM Resorts International, working her way up from clerk to a corporate position. From 2010 to 2018, she also represented District 42 in the Nevada Assembly, serving as Speaker Pro Tempore in her last leadership role.

She is married to Army Sergeant Brad Adams, and has two daughters, Olivia, and Alaina. She also is a new grandmother to her first grandchild.